Home Blog Hosain is starting to walk again – Thanks to you!

Hosain is starting to walk again – Thanks to you!

Last year we introduced you to Hosain.

Hosain is seven years old and because of leprosy he could no longer walk to school or run and play with his friends.

His parents didn’t know where to turn for help and couldn’t find anyone who knew what was wrong with their son.

Thanks to you Hosain is getting the help he needs. And other families will be able to as well.

The weakness in his foot came on over the course of a few weeks. Gradually becoming a pronounced foot-drop.

John, the Program Leader for The Leprosy Mission in Chittagong, said that his family thought the problem was a supernatural one.

“They thought it was the act of a ghost, so his father took him to the Imam (Muslim religious leader).” The Imam, who knew nothing about leprosy, “treated” him for three days but there was no improvement.

Hosain’s father, Naser, tried again to get help for his son. He took him to a government doctor.

Naser carried Hosain on his shoulders or on his lap across the city looking for help because he couldn’t walk.

Eventually they reached a doctor who had been trained by The Leprosy Mission’s team in Chittagong. He was able to diagnose his leprosy and to refer him to the right place to help his foot.

Thanks to you Hosain is now cured of his leprosy. 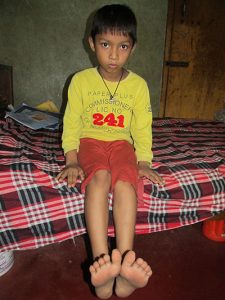 With physiotherapy he is regaining the use of his foot and can now proudly lift it again (photo, right).

Soon he will be able to walk to school again and will be running and playing outside just like all the other boys.

Naser and Jasmin, his wife, are thrilled to see Hosain getting stronger every day.

“We were very afraid, not knowing if there were any treatment for the disease or if the leg of our son would be strong again. We are so happy now that our son will walk, run and go to school again. We thank you very much for your care for him.”

And Hosain isn’t the only one you’ve helped.

Thanks to you, Community Activists from across the city are being trained to recognise the early signs in their communities. They will be able to direct people to where they can get the right help.

Thanks to you, doctors and clinics across the city are gaining a better understanding of how to diagnose and treat leprosy. And they are being supported and resourced to treat it themselves, locally.

Thanks to you John and his team are making big strides towards defeating leprosy across their city.