Home Blog You Cared For Prisha At Christmas

You Cared For Prisha At Christmas

Leprosy had brought a host of new challenges into Prisha’s family.

But last year you were there to help and care for her.

Your Christmas gifts for Prisha brought an overflow of love and joy to a family in need, and to many other families facing the heartache that comes with leprosy.

At six years old, Prisha “didn’t have a care in the world” despite coming from a very poor family. Until, 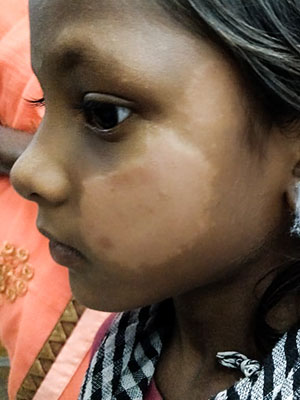 A little over a year ago, her parents noticed a pale patch on her face. But they didn’t worry about it – children get blotchy skin from time to time, don’t they? It wasn’t causing her any problems, surely it would just go away by itself in time.

But in Prisha’s case it didn’t go away, instead it grew to cover her whole cheek. Then other patches appeared on other parts of her body – and she couldn’t feel anything in any of them.

Eventually, her parents became worried enough to speak to a local doctor who referred them to Purulia Hospital.

As well as the patches, doctors at Purulia saw that she had weakness in one of her fingers. She was diagnosed with leprosy and nerve inflammation.

Prisha started the MDT treatment for leprosy immediately but would have to be admitted as an inpatient for the inflammation to be treated and so that she could be taught how to take care of her weak fingers.

When she was admitted, the doctors asked to examine the rest of the family – to see if anyone else was infected.

Prisha’s mother, Suga, and one of her older sisters were also diagnosed with leprosy.

Your support has allowed Prisha to start having physiotherapy for her hands and her doctors hope that her hands will recover completely.

Prisha is an active and bubbly girl, she has made friends on the ward and kept others cheerful. 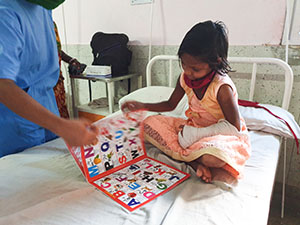 She was supposed to start school this year but schools were closed because of Covid-19. The hospital team got her a picture book, which she has enjoyed and she was quick to learn her alphabet and numbers.

After she is discharged, Prisha and Suga will have to come to Purulia Hospital for monthly check-ups and regular medication. They can also visit the hospital at any other time if any new problems arise.

Prisha will be cured of her leprosy within a year. But she is at serious of recurrence of the nerve inflammation she arrived with. So, she will have to visit the hospital at least once every six months for follow up for five years.

Thanks to your love and compassion, this long term care is there for Prisha for as long as she needs it.

It is likely that, even after she is cured, the pale patch on her face will remain visible. She may face stigma and discrimination later because of it. The team at Purulia will continue to counsel her to help her to face these problems.

Your kindness has not only cured Prisha physically, you will continue to support her to deal with the long term effects of leprosy for years to come. 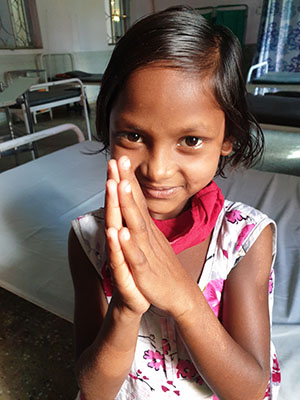 Prisha’s mum, Suga, will have to take MDT for two years and will need follow up for several years after that. Her leprosy had gone undetected for quite a long time putting her a greater risk of deformity and permanent nerve damage.

Thanks to you women and girls like Prisha and Suga will be spotted quicker and treated faster. You have stopped leprosy for this family and are helping to stop it completely for hundreds of others like them.

You are eradicating leprosy one person at a time. One person like Prisha.