You Gave Joy to Joymohan 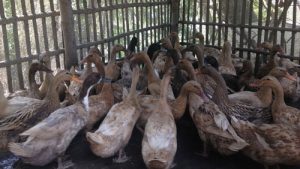 The ducks are quacking restlessly in their shed.

Joymohan and his wife and children can hear them first thing in the morning when they wake up on their new beds in their little house with its corrugated iron roof and walls.

Soon it will be time to get up to collect the eggs. Selling the eggs at the market, or even door-to-door has given them this better life. A life which has a safe, dry place to sleep, enough food to eat and the respect of their neighbours.

But before the eggs there was you. Before you helped him, Joymohan’s life was very different.

He had been left with nothing because he has leprosy.

For 15 years he suffered the dreadful effects of leprosy. For nearly 13 years he had repeated ulcers and was in pain.

At the government hospital he was given the wrong diagnosis.

Local people suggested he needed to make an offering of a goose egg. But Joymohan was so hungry he just ate it.

Somebody tied up his arms and used a snapper fish with sharp teeth to let blood from his fingers.

He even travelled from his home in Bangladesh to India to try to get help.

His search for a cure cost him everything. He lost land he had for crops, his wife ended up labouring in the field for others.

The Leprosy Mission’s Leprosy Control Project, based in Dhaka, found Joymohan nearly 3 years ago. For the first time he received the correct treatment for his leprosy – he is cured! 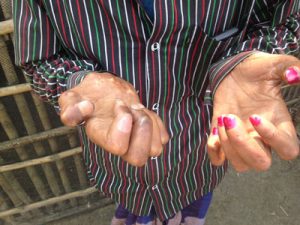 His hands are now stable but he has pain in his ankles and can’t blink. So far he has been too afraid to have the operation that could fix his eyes.

He was cured, but his family still had nothing – their home wasn’t waterproof, they had no food and they were sleeping on the mud floor of their house.

He is too proud to accept hand outs but with your help his family have turned things around.

Self Help Groups provide a means for people affected by leprosy to receive support within their community. People can access training and the small funds needed to start working for themselves. Work that is safe for them with their impairment or disability. Work that is profitable so that they can escape poverty. Work that is dignified to help break down the stigma of leprosy.

Your gifts meant that the self-help group was able to give Joymohan training and support to have this little flock of 50 ducks. The duck eggs provide the vital income that means Joymohan can provide for his family.

Your gifts will go on helping Joymohan, and many more like him, through these self-help groups long in to the future. 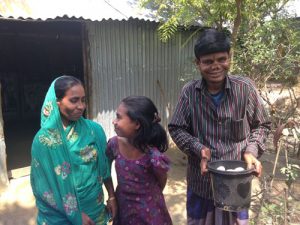 Joymohan has a beaming smile because he knows that he has worked to provide for his family with dignity.

He has been playing an active role in the self help group ever since and is now one of the group leaders, helping both his own family and others like them who find themselves in desperate poverty because of leprosy.

He hopes that his children will be able to get a good education so they can find work.

Your, and some ducks, have transformed his life.