Home Blog You Can Be A Star For Diyan This Christmas

You Can Be A Star For Diyan This Christmas

You can give Diyan the best present ever.

Be a star this christmas, make his leprosy a thing of the past

Can you remember the best Christmas present you ever received? It’s probably not the biggest or the most expensive, it’s the one that showed you that someone really understood you. Someone had thought about you and given you something that was just right.

For Diyan, the best Christmas present will be for his leprosy to be a thing of the past.

Diyan was just 6 years old when he was diagnosed with leprosy. How could he have known that he had been infected? The patches on his face were a sure sign that something was wrong but he didn’t feel ill. He had burned his hand very badly but he didn’t cry. He wasn’t in pain. He didn’t even feel it.

When you’re thinking about what to give your loved ones this Christmas will you give Diyan his perfect Christmas present too? Your gift of £24 could do just that. What better gift to give this Christmas?

Diyan has got used to the loss of sensation, especially on the patches on his hands and feet. He’s constantly in danger of hurting himself. He can’t feel injuries. And as a result, he’s at risk of infection.

That’s one of the terrible things about leprosy. It often attacks the body without anyone noticing it at first. And if it’s not spotted early, the result can be devastating. Leprosy is completely curable. If it’s spotted early and treated fast it can be stopped before it leaves any lasting effects.

Diyan wasn’t spotted early enough. The damage had been done, and he will never recover the loss of sensation in his face, hands and feet. Thankfully he will be taught vital self-care. But he will have to remain vigilant daily. If only he had been treated early enough.

Without amazing people like you, Diyan would not have been spotted at all. That’s why your generous gift today of £24 is vital! It will mean another child like Diyan can be spotted and treated, before it’s too late.

Think of that present again. Perhaps it reminds you of someone you miss.

Diyan misses his mum – she died two years ago. His dad, who is also being treated for leprosy, is away working. Like so many children with leprosy, he is alone.

Diyan is old enough to know he looks different, and that frightens him. His clawed hand, and the patches on his skin are tell-tale signs of his leprosy. He feels safe at the children’s home in India where he’s being cared for.

But outside the home people call him names and stay away from him. There is no room for him. He can’t join in with the other children.

That’s difficult to understand when you’re 7 years old. That your sickness makes people afraid of you. Wherever Diyan goes he faces that same fear of rejection.

This Christmas you can give children like Diyan the perfect gift, you can spot, treat and stop their leprosy.

The best Christmas present you ever received is unique to you, to some people it might even seem odd.

At the first Christmas, wise men brought gifts to Jesus which were certainly unusual, but they were also very meaningful.

Children like Diyan hope for an unusual gift this Christmas. Your gift to them can make their leprosy a thing of the past. 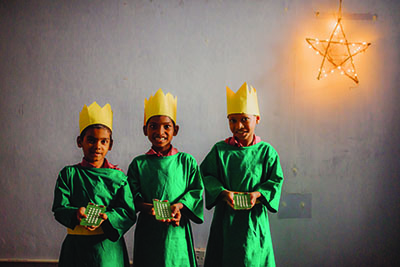 Diyan played a wise man in the hospital nativity. Three boys carried gifts of the cure for leprosy.

Will you be part of his Christmas story? A gift of £24 this Christmas will get the right treatment to a child like Diyan for real. You will be eradicating leprosy, one person at a time.

For children like Diyan you can be like the wise men from a far away place. You can give the most meaningful Christmas gift.

Imagine how Diyan will feel to know that you are thinking of him this Christmas. What a comfort it will be to know that he is not alone.

Jesus came to earth at Christmas time so that all people would know that they were not alone. That God loves them and cares about them. No one was left out. “Emmanuel. God with us.” (Matt 1:23)

The sign of his birth was a star. A bright, shining light.

Will you be a star for children like Diyan this Christmas? A bright, shining light of joy and hope? A sign that they are not alone, that they are loved. By you and by God.

Please give what you can this Christmas to cure children like Diyan of their leprosy. I can’t think of a more perfect Christmas present.

I wish you and your family a very happy Christmas. Thank you for whatever you are able to give.