As a child Ram loved to run and play with his friends, all kinds of playground games or running and catching each other. He played games at school, but he became irregular, then stopped attending school when he started to suffer from swollen feet and hands and the 20-25 minute walk to school became too painful. He was 8 or 9 years old. Nobody his mother spoke to knew what was wrong.

At such a young age he did not understand the stigma of leprosy or why he was being rejected. 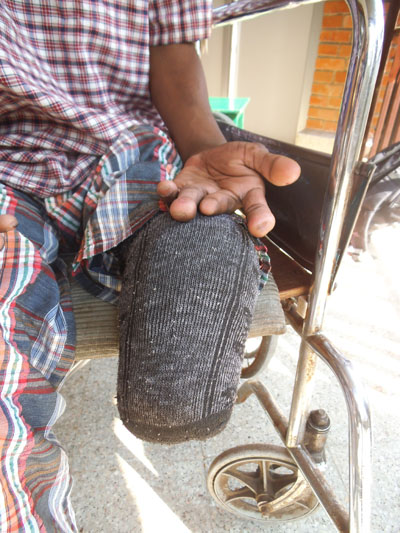 As a young child he did not know how to properly self care. He would wear sandals that offered little protection so his feet would blister in the heat which eventually became ulcers.

At 14 he was referred to Anandaban Hospital for these to be looked at, where it was decided that his left leg would need to be amputated. He travelled to Anandaban by ambulance alone, faced the amputation surgery alone and during his 6 month recovery, received no visitors.

Because his Father had rejected him, he was unable to return home to be with his mother, who also has no income to provide for him. He was sent back to Lalgadh Hospital, where he lives alongside the elderly in a care home, with a new prosthetic leg made at Anandaban.

With the difficulty of walking with an artificial leg, he fell and broke the leg that had previously been partially amputated. He returned to Anandaban where he had surgery to insert a plate in his leg.

Your gifts and prayers enabled him to be helped at Anandaban Hospital.

He returned to Anandaban again to have the plate removed. During his whole 2 – 3 months in hospital after surgery, no-one came to visit him.

You showed him that he is not alone; that there are people who care for him from the other side of the world and who want him to have the best possible future. 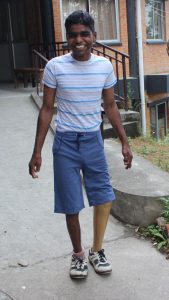 Ram has a new prosthetic leg, made at Anandaban Hospital which has restored his independence and dignity.

His father has now moved to work in Saudi Arabia, so Ram hopes he can return home to live with his mother. He has not met his Father for so long that he does not know if he will now accept him, if his father were to return from Saudi Arabia. He does know that if he is again rejected, then he would be able to return to the hospital to live.

In the future he will need to return to Anandaban as he grows to receive new artificial limbs. Disability Prevention Training means that he knows how to take care of his leg properly and to prevent future injury.

He doesn’t know what his future might hold but thanks to you he knows that he is not alone and can get help and support when he needs it.