Every week during lent we will be posting a short devotional thought which we hope you will find a blessing.

If you have a pulse, you’re qualified…

‘There’s a little boy here who has five barley loaves and two fish. But that’s a drop in the bucket for a crowd like this.’ John 6:9

I was looking at this passage the other day with some friends of mine. It’s funny how you can be so familiar with the story and yet still something new will hit you.

You can imagine it, can’t you? The little boy running up to Jesus with his hands full of the family lunch. ‘I’ve got some, here, you can have mine.’

He had overheard the discussion between Jesus and his disciples. He felt he had the answer and so he ran forwards. I wonder, did he ask his mum, or was she watching, with her heart sinking, as she saw the only food they had brought, disappear into the crowd.

Philip looked at the numbers, saw the immediate and incredible need, and the little resources they had. ‘Two hundred pennies worth of bread is not enough’. Apparently a sum equal to two months wages. The boy heard Jesus and offered what he had.

How do we explain the mystery of what happened next, except by saying it was miraculous? Jesus took what was offered, blessed it, and thousands were fed.

Neil, the minister of our church, said last week that many of us feel we have nothing to offer God, and therefore feel disqualified from serving him. ‘But,’ he added, ‘if you are a Christian, and you have a pulse, then you’re qualified.’ What a relief. I can do all things through Christ who strengthens me. I just need to be willing, offer him my loaves and fish, and leave the rest to him.

Jenny Hawke – Extract from ‘Elephants in the Rush Hour’

Lord, I’m ready.
No more excuses.
Let’s go,
with the little I have
and the power you give,
we’ll make a good team. 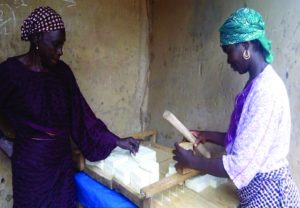 When teenaged Rachael developed patches on her skin, her family didn’t know what to do. When sever ulcers appeared in her hands and feet she was shunned by her family and neighbours. At a hospital run by the church she found people who cared, who diagnosed, treated and cured her leprosy. She also found love with one of the other patients affected by leprosy.

With her husband and children she has only ever known poverty and living hand to mouth. That all changed when she joined a self-help group supported by The Leprosy Mission. She received training in soap making, as well as marketing and customer relations. With a small loan she has started making and selling soap. She can now put food on the table, send her children to school and have hope for their future.

Pray for Rachael and her community and ask God what he wants you to give today.

You can make a donation to support the projects in India and Nigeria mentioned in our lent devotionals.