Home Blog You Can Cast Out Leprosy For People Like Phyo

You Can Cast Out Leprosy For People Like Phyo

Leprosy Made Phyo An Outcast

Can you imagine what it would feel like to be banished from your parents’ house and community? What if their only reason was that you’d fallen in love with someone who’d been sick?

Phyo was diagnosed with leprosy when he was just 19.

He was so scared of it that he ran away from the hospital and his mother had to bring him back to be treated.

Your gift this Easter could provide a hospital bed for someone like Phyo.

Because of leprosy, Phyo has lost virtually all sensation in his foot. He has had recurring ulcers because of this, requiring long stays in hospital while they heal.

On one of those stays he met Mahwe, who was visiting her grandmother. He helped her with a problem with her phone.

They became close, fell in love and got married.

There are so many other people just like Phyo throughout Myanmar. They need a place of safety too. A place where they can be cared for. This is
how you can help.

You can provide someone just like Phyo with somewhere to heal and a safe place to stay.

Your gift today will help provide a hospital bed for someone just like Phyo. Because of you, and others who share your compassion, many more people affected by leprosy can be treated. They can be cured. And have the essential aftercare needed to restore their health and rebuild their lives. 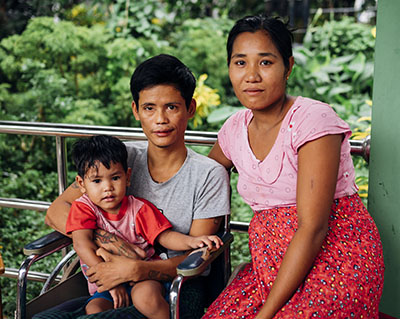 Because of Phyo’s leprosy, Mahwe’s family have disowned her. They refuse to let Phyo, Mahwe or their son come to their village and have completely cut them out of family life.

Can you imagine the pain of your parents not wanting to see your child, their own grandchild?

They only have each other.

Phyo has a serious ulcer on his left foot. As a result, he has plaster around his leg and foot to relieve the pressure on the ulcer. He knows that because of the severity of his ulcer the only place he could only get help is from Mawlamyine Hospital.

Without Mawlamyine Hospital he says that “I would have died”. He says thank you so much for your support, and he wishes that everyone can support more in the future and continue supporting leprosy patients.

When you give a gift this Easter people like Phyo will recieve the treatment they need to overcome all of the effects of leprosy in their lives and to live with dignity and hope.