Home Blog Joymohan has been left with nothing because he has leprosy.

Joymohan has been left with nothing because he has leprosy.

For 15 years he has been suffering the dreadful effects of leprosy. For nearly 13 years he had repeated ulcers and was in pain.

At the government hospital he was given the wrong diagnosis.

Local people suggested he needed to make an offering of a goose egg. But Joymohan was so hungry he just ate it.

Somebody tied up his arms and used a snapper fish with sharp teeth to let blood from his fingers.

He even travelled from his home in Bangladesh to India to try to get help.

His search for a cure cost him everything. He lost land he had for crops, his wife ended up labouring in the field for others.

You can give him new hope for the future, now.

The Leprosy Mission’s Leprosy Control Project, based in Dhaka, found Joymohan just over 2 years ago. For the first time he received the correct treatment for his leprosy – he is cured! 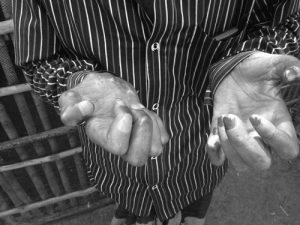 His hands are now stable but he has pain in his ankles and can’t blink. So far he has been too afraid to have the operation that could fix his eyes.

He was cured, but his family still had nothing – their home wasn’t waterproof, they had no food and they were sleeping on the mud floor of their house.

He is too proud to accept hand outs but with your help his family can turn things around. 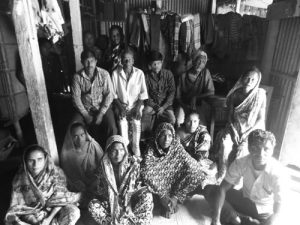 Self Help Groups provide a means for people affected by leprosy to receive support within their community. People can access training and the small funds needed to start working for themselves. Work that is safe for them with their impairment or disability. Work that is profitable so that they can escape poverty. Work that is dignified to help break down the stigma of leprosy.

Your gift today will support Self Help Groups in his area so that Joymohan can work his way out of poverty with pride and dignity.

At harvest time many schools and churches celebrate the many good things that we have been provided with. Please give so that Joymohan can have something to celebrate too.

In this rural area 80 miles outside Dhaka everyone makes their living from agriculture. Incomes are low and opportunities for people affected by leprosy or disability are even lower. Few people can read or write and most borrow land to cultivate. 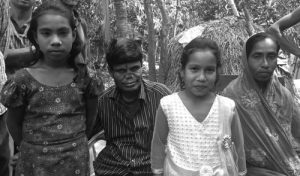 Your gift could provide training so that Joymohan and other group members can be trained in better forms of agriculture that are safe and effective.

You could give him a loan or grant to get started in work that will support himself, his wife and two daughters with dignity.

You can give him a new harvest to be thankful for.

Please give what you can today for many brighter tomorrows for Joymohan and his family.