Stuart in Yangon – Learning and Inspiration

I would have loved to have longer to spend visiting Bankura and Purulia, but the only reason I’m travelling at this time of year (Joy at Purulia had said “you want to come in April? are you sure? it’ll be awfully hot”) was to take part in the Annual Country Learning (ACL) workshop for The Leprosy Mission Myanmar.

It’s not the easiest place to get to but Yangon is a beautiful city – clean, quiet, safe and relatively cheap. I realise that this is largely a fiction and the city is sanitised compared to the rest of the country for the benefit of visitors, but it does make for a welcome change. Clara from The Leprosy Mission’s International Office is here to facilitate the workshop and we have both enjoyed the freedom to go out in the evening to get something to eat and to be able to walk down the road or hail a taxi and feel completely safe doing it. This isn’t something we’re allowed to do in many of the places we go to visit.

The three days of the ACL have been great. A lot of the discussion has taken place in Burmese so Clara and I have been dependent on folk to translate for us but it has been a joy to meet so many of the staff from different parts of the country and hear a little about their work. I got the impression that many of the people there had never met each other before either as they work in scattered locations. Part of the ACL was set aside for a short leadership training course for everybody and it was exciting to see how even in the few days together the whole team grew in confidence and unity.

Having spent time together I have high hopes for the future development of the programme in Myanmar and would hope that with your help we will be able to increase the amount of support Scotland is able to give to help tackle leprosy in Myanmar. 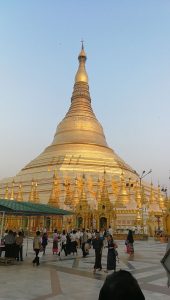 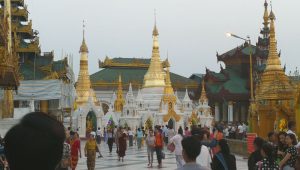 As well as 3 long days of hard work we were able to have some fun as well. The food was great – very like Thai but with influences from India, China and other parts of south east Asia as well. A highlight was visiting the Shwedagon Pagoda in central Yangon.

This massive, ornate Buddhist temple took over an hour just to walk around, without really going in to any of the buildings or taking part in any prayers or other acts of worship. As a Christian I believe that the prayers and worship are ultimately in vain but the devotion and sincerity with which it is approached leaves many church communities in Scotland trailing in their wake.

So after 3 days in a meeting room in Yangon tomorrow I’ll be heading off cross-country in a bus (only 6 or 7 hours) to the city of Mawlamyine where there is a leprosy hospital that your gifts support.